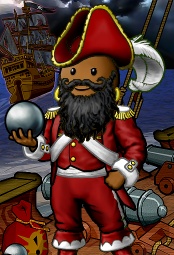 Majortom is a senior officer of the crew All For Rum and a prince of the flag Wicked Peace on the Hunter Ocean.

Majortom began his pirate career on the Sage Ocean around August 2005. Upon starting out in the game, he soon found the crew Shadow Raiders, captained by Endless, which he then joined and eventually rose to the rank of senior officer. After spending some time in Shadow Raiders, a large portion of the crew's leadership became inactive, and Majortom left to create his own crew, Lonestar Legends. His crew drifted between flags over the next few months, but eventually found its way into the flag El Mercado Libre, led by Dingybeard. Not long after that, he and the mates of El Mercado Libre caught wind of the opening of the Hunter Ocean, and they decided to move the flag there.

On the first day of Hunter's existence, Dingybeard created the crew All For Rum, and the flag Wicked Peace, and Majortom was immediately made a senior officer in the crew, and a prince of the flag. He remains in those positions today.

Majortom derived his pirate name from the fictional astronaut of the same name in David Bowie's hit song Space Oddity.

Majortom has navigated or admiraled in the following blockades: