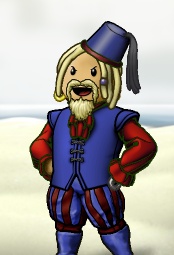 Lofwyr is senior officer of Privateers and prince of the flag Black Flag. He plays on Emerald Ocean.

Lofwyr started playing puzzle pirates on April 21th 2005 on the Indigo Ocean, when his wife brought him to the game. After a successful year on Indigo, Lofwyr set sail to Sage Ocean, where he joined PFRC. And merged into The Lost Lot.

After 2 months he joined Swashbucklers of Sage as an officer, and climbed up ranks quite fast to achieve senior officer rank within two months. After the Kasidim I blockade, he was given the privilege of beeing a prince, and the blockade admiral to Notorious.

In January he felt it was time to go his own way, and created, together with Desirehchen and Dargomis, the crew Ocean Anarchy. In April, Ocean Anarchy moved to Eternal Glory.

After his 4 month retirement starting June 2007 he returned to game on November 2nd 2007 and joined Shanghaied.

He took a break from the game 2008 until he rejoined back into Privateers in October 2014 and became a senior officer and Royal to the Flag Black Flag soon after.

Lofwyr is known for his skills in PvP. He has huge experience with blockades, both organizing and driving them.

Lofwyr is also credited for discovering the exact number of needed loaded cannons for the golden gun trophy.