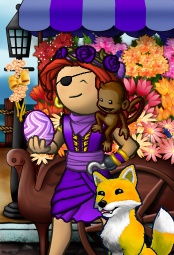 Keerin is a pirate on the Cerulean Ocean. She is a senior officer in the crew Jacuzzi Club and princess of the flag Babylon. On the Emerald Ocean, she is captain of the crew Lone Wanderers and member of the flag League of Light.

Keerin joined Cerulean in December 2010, a year after she joined the game on Emerald as Runkeerin. While she plays both oceans from time to time, she now calls Cerulean her home. After a few rounds of citadel runs, she joined Gonzaga in his crew Banana Republic when they were in the flag Dies Irae, which they remained there until 2015. She has since been in flags such as Universe A and Resurgence, and she and Gonzaga ultimately moved to Babylon, where she remains to this day. Since joining Cerulean, she has learned to govern Kirin Island with the help of her flagmates, and fully memorized the ocean on April 10th, 2015.

Keerin enjoys Cursed Isles runs, bilge tokening (to which she gained the Spires of the Pump trophy on April 2nd 2017), being silly with her best friend Jacktar, and hoarding portraits.

In her spare time, Keerin enjoys hanging out with her faithful wine pony sidekick Petunia. After befriending the lone and hungry Petunia on Kirin docks (she bought her off Seatexan, really), Petunia has become a major part of Keerin's character, often showing diva-ish behaviour and the need to appear in Keerin's portrait collection (in reality, she forgets to take her out before previewing!), and has the tendency to go off with Keerin's friends in their portraits. She never speaks, preferring Keer to do it for her, and doesn't like other ponies other than her white and banana sister called Daisy, and friend Fourteen's pony named Viola (quite jealous, really). Like Keerin, she enjoys Cursed Isles runs (she thinks Vargas the Mad is attractive), and plenty of carrots.

Keerin collects most flowers holdable in portraits. The list can be seen here.