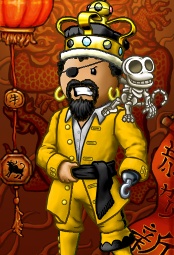 Gonzaga is a pirate who sails the Cerulean Ocean. He is the captain and counselor of Lost, and prince of the flag Universe A. He is well known for his contributions to many Cerulean blockades. He collects familiars as well as Ocean Master dolls.

Gonzaga returned from retirement in the Summer of 2013 and joined For Glory or Honour as a senior officer in the Jazzie Crew, giving up his former royalty spot in Stark Raving Mad. He became heavily involved with FGoH's blockade plans and was eventually appointed as royal. At some point during his royalty tenure, he decided to venture off and create Banana Republic as an independent crew from Jazzie Crew focused on atlantis runs.

In January, 2014, Banana Republic and Lost left For Glory or Honour to create Pixelated Warfare. Gonzaga was chosen as king of the flag. Pixelated Warfare was involved in several important blockades on Cerulean, possessing control of Terra, Jubilee, Guava at its peak. Pixelated Warfare later merged with two other flags to recreate Dies Irae as a tripartite entity with equal power shared between Gonzaga, Vova, and Calamarie and their respective crews. Gonzaga was involved in numerous blockades with Dies Irae and Banana Republic remained the biggest and most active crew for the entire duration of its membership with Dies Irae.

In February, 2015, Gonzaga and Banana Republic left Dies Irae to join Universe A as a result of a longstanding friendship between Gonzaga and Zarchi. Banana Republic had decided amongst themselves that being in Universe A was a considerably better fit for their crew. Banana Republic and Lost then merged, with Gonzaga assuming the role of Captain of Lost and both Gonzaga and Yorkyblue taking royal positions in Universe A. Shortly after, the flag For Glory or Honour decided to merge into Universe A as a partnership between all of Zarchi, Yorkyblue, Aristoza and Gonzaga. This saw a revival of the flag Universe A and plans were made to contest Dies Irae's longstanding hold of Turtle island for close to a decade. Universe A was successful in unseating Dies Irae from Turtle island and built a Shipyard to commemorate their victory, named Universe Eh, to which Gonzaga now holds the deed.