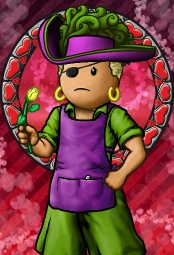 Kayh is currently senior officer and treasurer of the crew The Rum Runners. He is a lord of the flag Twisted Fate. He is also the owner of a weaving stall and a manager of a shipyard - both on Oyster Island.

Kgeo washed up upon the ocean of Sage when he played for the first time on November 3, 2005. He was playing on a computer which re-set every night, so he re-installed it the next day, and the day after that again. When he returned home, he re-installed another time, to find his pirate missing, so he set up another one. This is how he ended up on the Midnight Ocean.

Kgeo moved around from crew to crew when he first started to play the game on Midnight, because he couldn't find somewhere he fit. He remained independent until he had the statistics to make his own crew. That day, he did: Ice-Cream. Here, he met his first mate, Chaosdragon. He run many different crews, including two resurrections of Ice-Cream, but also Chaos Vel Licentia, The Nautical Transitions (TNT), and Twin Dragons. In the end, he merged the crew into the crew of a hearty, Danieluk's Oceanic Espionage, where he later became captain, before eventually, due to activity, disbanded.

In December 2006, during the December Doodles event, Kgeo won a green octopus for coming first in the Treasure Drop tournament. In January 2007, Kgeo was deleted, and Kayh was made.

Kayh spent a lot of time, much as Kgeo did, looking for a crew where he thought he fit, before taking a year and a half's hiatus from the game, only coming back occasionally. It was not until December 2010 that he returned as an active pirate, and joined a crew for a few weeks, where he did not feel he fit. He moved with a good hearty to his new, and current crew The Rum Runners - a part of the flag Twisted Fate.

His favourite puzzles are Treasure Drop, Hearts, and Sailing. He keeps clear of Carpentry and Distillery at all costs.

Today, Kayh is mainly found playing parlor games, as opposed to pillaging, but still takes/helps on the occasional one.

Kayh doesn't keep every trinket he collects, but the ones he did are below.

He has more, but there is no inscription, and they're not worth mentioning.

Kayh has the following renamed ships: