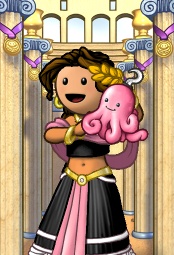 Kareen is a pirate on the Viridian Ocean.

Kareen first saw daylight on the Viridian Ocean on August 25, 2005. Wandering alone and jobbing around the ocean for a few days, she finally took a permanent position as cabin person in the crew Dragon's Horde. She was promoted to pirate after a few weeks, but decided to change crews not long after her promotion. She then joined her friend's crew, Dead Men Tell No Tales.

Upon joining, Kareen was immediately made fleet Officer by the captain. Having never been officer, she followed traning and soon became a respectably skilled officer. Feeling at home in her new crew, she was very content with her choice. After a few months, she was promoted to senior officer. She stayed in the crew through thin and thick and was named first mate during summer 2006.

At the beginning of February 2007, Kareen's very good friend, Laly, captain of Dead Men Tell No Tales, had to leave the game for a few days for personal reason and placed her as captain until she came back. Unfortunately, Laly never came back and Kareen stayed as captain. Having found her pirate love in her crew mate Roadcyclist, she married him at their townhouse on Tigerleaf Mountain on March 2, 2007.

Unable to keep up being captain and full time student in real life, Kareen, who did not like captainship all that much, decided it was time to change crews and move on. However, she was unable to disband the crew she had loved, and seeing as there was no one else interested in taking over captainship, she decided to place her alt, Phoebz, as captain of Dead Men Tell No Tales. By the time she decided to act, most crew members had already decided it was time for them to move on also, as the crew was just not the same without its rightful captain.

Therefore, Kareen left Dead Men Tell No Tales with her husband and joined the crew - Poseidon's Wrath - of the flag Sea Change on May 14. They both joined as officers, but were promoted to fleet officers on the next day. Roughly two months after they had changed crews, Roadcyclist quit the game due to personal reasons. Kareen, who had been already offered the position of Senior officer, decided to decline all propositions and joined her best friend's crew, Infinite Depths, in which were several other friends of hers.

Kareen was made senior officer on the spot and still enjoys her time in her crew.