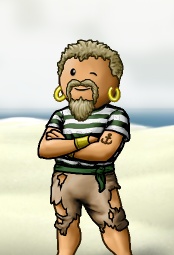 Joining in 2005, Johndigger was an admiral for some of the largest blockades in Puzzle Pirate history, including the notorious simultaneous 5-island drop on Corona IV, Prolix III, Kirin V, Conglin III and Viridis VIII involving over 1,000 pirates for the (SSS) Scuppering Seven Seas (sometimes named The Borg) on the Viridian Ocean.

Originally starting off as a blockade navigator within The British Eagles under Antix and Dragonblade, Johndigger replaced Flakcannon as admiral for the SSS. Morphing into The Borg under Scupperer which conquered a large part of the Viridian Ocean in a long lasting rivalry with the other main power on the ocean, Pay for Play.

Johndigger currently admirals for Ellipse and -'The Star Explorers'-.

Johndigger was controversially banned for docktarting on Terra on the Viridian Ocean, which led to an outcry and the 'Free Johndigger' campaign on the official and now defunct, Viridian Ocean Forums.

After review by OOO this was eventually rescinded and Johndigger continues to sail the waves of Viridian.

Realising the high barrier to entry for Blockade Navving, particularly for those without a history on the Midnight Ocean Johndigger founded a Battle Navigation school for aspiring Blockade Navvers where they trained several times a week and this not only introduced a new generation of pirates to blockade navigation but also introduced the Viridian Ocean to a new echelon of Blockade Navvers, such as Martobain.