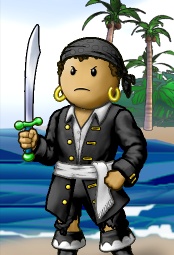 Ivole started out on the Hunter Ocean in February 2007. He has played 2 oceans since, those being Sage and Malachite.

Ivole first logged on to the Hunter Ocean on February 7th 2007. He soon learned how to puzzle, and became part of Elve's crew, Wrath. It was there he was made royalty of Elve's flag, Rebirth. He was soon fit enough to be a King, but after a while, Ivole decided it was time for a change, so he packed his bags and moved to Sage.

Ivole walked onto Sage in April. He was convinced by Beebe to join her crew Orestes. He didn't feel at home there, so he made the move to Skymike's crew, Death Wish as a fleet officer.)

WHAT? Back on Hunter?!

After a while of Sage, it became not as fun anymore, so he decided to visit some of his old friends on Hunter for a while. It was November 07 when he met the likes of Keight, Calicojack, Bootyking, Jacada, Gunnermooch, Redspyda, and Istarion. They had laughs over ventrilo together, and overall had an awesome time. He joined Bootyking's crew, Bootyqueens Revenge as a senior officer, and this is where he discovered his love for blockade nav.

He is currently in Dalnoth's crew, Virtute et Artmis, as an officer.

He has now moved back to Sage and plays there as a senior officer in Death Wish.