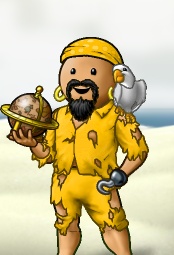 Skymike is a senior officer and scapegoat of the crew Death Wish and king of the flag Eternal Glory.

Formerly the captain of Death Wish he proudly sails the Sage Ocean. After making his way up the ranks in SSoS...on November 5th, 2006 he decided it was time to move on to bigger and better things. Thus, Death Wish was born. Mike is one of the greatest captains to sail the seas of Sage. He is also the best friend (or worst enemy) a pirate could ever have.