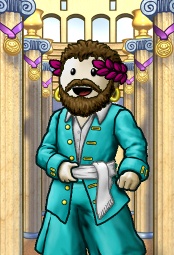 Interguy is a senior officer of the crew The August Charade and king of the flag Epilogue. He is an avid pillager on the Viridian Ocean and also enjoys blockades. He took a year break from Puzzle Pirates in 2009, but is now active again. Interguy's favorite puzzles include Bilging, Duty Navigation, Battle Navigation, and Shipwrightery.

Timeline of his Puzzle Pirates life

When starting back into Puzzle Pirates at the beginning of 2010, he met Lune during a pillage and joined up with him. In the crew, The August Charade Interguy became best friends with Jackeroe who soon became his pillaging buddy and navigation competition.