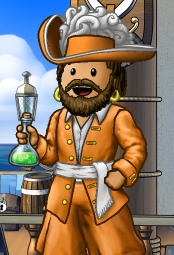 Instantflash the senior officer of the crew Dark Dynasty and royal of the flag The Wrath of Armageddon on the Viridian Ocean.

Instantflash washed up on the shores of Labyrinth Moors on April 21st, 2007 and he has risen up though the ranks and is now captain. He once was part of the crew Souls of Darkness, under the captain Monkeyluffyd. Then he went off to create his own crew, now known as Vicious Squids, with a fellow pirate, Slipco. Soon after that he was promoted to captain. Then he followed his friends to create a new crew under the fearsome captian Crazycomet. Crazycomet left the crew because he stated it was to much to handle for him. The crew was run by the three seinor officers remaining for a couple of months. Then the council of Seinor Officers decided that the crew would run more efficiently if there was a captain. Instantflash took the place as the captain of The Demons of Rogoriz. The Demons of Rogoriz lasted for a while untill its crew numbers went down He merged with his friends crew in the same flag, where he is today.

He can usually be found pillaging around Lima Island with his crew. Also he is very well-known in the Lima inn as a ship merchant, and on the high seas as a trader.

Although he can be seen rarely on two other oceans his main account is on the Viridian Ocean. His other pirates are on Ice Ocean and Sage Ocean, which he rarely visits.

Instantflash lives at his cottage on Carmine Island. Instantflash also owns a tailor and an ironworking stall on Lima Island.

Instantflash is the owner of the following renamed vessels: