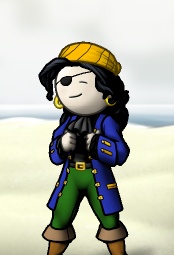 Idol is an island designer, senior officer of the crew Mermaid's Odyssey and princess of Angels Immortal.

Idol embarked into her piratey ways in April 2005 upon the Cobalt Ocean.

She was taken in by the crew Tribulation Force soon after crossing paths with Hadassah upon the seas.

In July 2005, she was to be wed to Krawkk and soon learned of the dangers of political entanglement. His flag opposed the marriage to someone outside of their loyalty and they parted ways.

It was then that her pirate life would be irrevocably changed forever. She met a pirate captain named Muffbeard of the crew Enviable Enigmas. During their courtship, she decided to seek newer adventures upon the ocean and accepted a fleet officer position with Serve no Porpoise flying the Valor flag.

Among the turmoil within the crew a month later, she joined several other officers and took a lateral position in the crew Athame. Her love for Muffbeard culminated on November 6, 2005 when they were wed upon the shores of Fintan Island.

A month later, with her crew becoming stagnant, she ran into a piratess named Padamae and their friendship grew and took an officer position within the crew Imperial Pillagers of the flag Imperial Margarine. This would also be the first crew that she and Muffbeard would share together.

Political turmoil erupted within the flag which led to Muffbeard leaving the crew, to which she followed him into Black Horizon of Hurricane and soon after was bestowed the royalty position of princess.

Unhappy with the political downfalls of the flag, she and Muffbeard joined the crew War Bandits captained by Henain. After too many changes in leadership, she decided to start anew and reclaimed her crew Mermaids Odyssey to which she now resides semi-retired with her love Muffbeard.

During her non-piratey times, Idol involves herself in the forums and within contests which led to her selection as one of the newest island designers.

Idol is one of the winners of the Fantasy Island Contest. Her wonderful design work can be seen at the following islands:

"My island was inspired by all the little piggies running around the oceans. Stepping onto the island and after wndering around your pirate can see all the piggy families and their friends. This is a pigs get away for catching up on eating, playing, tanning, and most important of all, sleeping. They can mostly be found in the shade, or by water. How many can you spot? ;)" - Idol