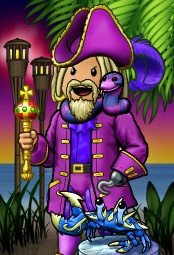 He sold/donated all shoppes except for the above mentioned and manages a lot of others.

Hunta returned in 2005 becoming captain and king of a peaceful little flag, but left in 2006 due to personal commitments.

Hunta returned to the Viridian Ocean after an extended break from the game in 2008. To his amazement, he found that drinking tables were no longer a part of certain vessels, and the layout of other vessels had changed. New games were available at the inn and new duty puzzles had arrived.

Hunta met a lovely captain by the name of Kealalee and was quickly swept into the ranks of Long John Silver as a pirate. Hunta worked his booty off and quickly rose to the rank of fleet officer under the guidance of his new captain and with the help of his new crew mates.

After a few months Hunta was promoted to the rank of senior officer.

Mid 2008 saw a big change coming that no-one anticipated. Hunta's mentor and captain decided it was time for her to have a new adventure away from Pirate life. To his astonishment, Hunta was promoted to the rank of captain of Long John Silver.

Hunta became a dedicated member of the RiddleMakers flag and was given the honor of becoming a titled member. Along with this honor, later in 2008 Hunta became governor of Spectre Island when RiddleMakers were victorious in The Extreme Blockade Spectre XIII: 2008-11-3.

Hunta became a prince of RiddleMakers on the 14th June 2009.

After reaching the dizzying heights of Prince, Hunta knuckled down and was taught the ropes of politics, blockades and flag running by Seepnah, Cutthroatale, Flar, Jimpanzee, Daenerys and Leeperry.

Hunta continues to improve on the fundamentals he learned from some of the best in the business and constantly encourages flag mates to take pride in their flag and learn the tricks of the trade.

Hunta was the first pirate on Viridian Ocean to gain illustrious standing in the patron reputation on the 8th day of October 2009.

Hunta is a quiet pirate and still very active. Pirates can find him cruising the poker tables at the inn or puzzling away with addiction.