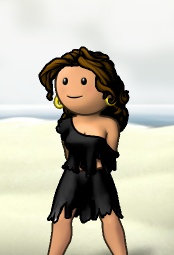 A Pirate's Life for me - The History of Cutthroatale

Cutthroatale, or Cutteh, is now retired and this is her story. She joined Puzzle Pirates summer of 2005, as the result of convincing by her friend in real life (Whoathere in Neptune Pirates). She ended up shipwrecked on Viridian, and was forced to bilge and swordfight for her pride, like the rest of the greenies at that time.

She instantly became addicted to the game, not to the extent she is these days, but addicted nonetheless. Cutthroatale quickly learned to sail (which remains her favorite favorite puzzle to this day). She joined her first crew in July 2005, Rolling Thunder, but as those who know Cutt well would understand, she left the crew because she didn't like how she didn't know anyone. Cutthroatale then joined Heaven nor Hell, but as she still didn't know anyone, she left that crew rather quickly as well.

Then school started up in September 2005 and Cutthroatale quit for a while, and thus her pirate was deleted. She rejoined PP again in June 2006 when she joined Ducha De Oro (DDO) in the flag Nanuq. She quickly moved up through the ranks in DDO, eventually reaching her current position, as captain. During the period when the flag was a democracy, she was elected monarch for a period of 3 months. DDO was shortly afterwards moved to RiddleMakers where it still resides today.

Blockades Cutt has JC'd for