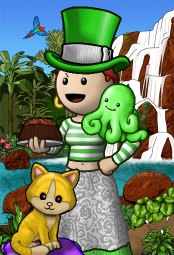 Gypsyjayne plays exclusively on Sage, where she is a senior officer and first mate of the crew Just Because and a princess of the flag Bananas in Arms.

Gypsyjayne was originally known as Ladyjai, for the beginnings of the pirate please refer back to that page.

When Ladyjai retired so did her alt Gypsyjayne however, upon being begged over Facebook to come help in a blockade one Saturday night, the Gypsy did return. She realised that despite not having time to play the game as often, she did miss talking to her piratey friends. By this time the flag owned by Ladyjai had disbanded so Gypsyjayne, the alt, became the main pirate of the account. All ship deeds, valuable trinkets, pets and furniture where moved over to Gypsyjayne's possession and the rest, as they say, is history.

Now Gypsyjayne resides on Admiral Island in a rather clutterd manor with her rl and piratey fiance Gypsyhuggy. She rarely does anything other than fill guns in blockades and sell out her labour to flag shoppes and stalles these days.