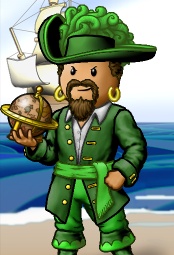 On the Viridian Ocean:

On the Malachite Ocean:

On the Sage Ocean:

On the Cobalt Ocean:

On the Midnight Ocean:

Greenslope began his career as a pirate with humble intentions. A ship and the ocean were enough to occupy his time. He joined the crew History and quickly gained the trust of crew founder, Trenna, and was given the title of first mate. When Trenna departed the game. Greenslope became the new captain. He was later joined in History by Teuts, a fellow compulsive forum contest enterer.

He is moderately active on the forums and has produced award winning Avatars for other forum members. During the Halloween 2008 forum contests, Greenslope earned his first familiar, an orange octopus named Viridian, since recolored to lime. Also, his first renamed ship, the Haunted Pumpkinseed.

The name "Greenslope" comes from an etymological interpretation of his player's last name.

He is known to almost always use proper English spelling and military time.