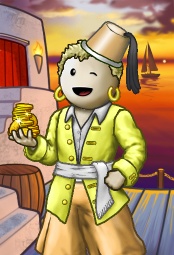 Furkeyno is captain and surgeon of the crew Sea Sand Sun and king of the flag Proud To Love on the Emerald Ocean. He is also a character of some notoriety on the forums, with rumours of his over-turned RMT ban circling like sharks.

Furkeyno started Y!PP on the Sage Ocean in April 2008 and is still active. He has been a member of many crews in many capacities, including:

"You should have asked when your birthday was on greeter chat and we could have avoided this situation." - Dwizzles, King of Illuminati

"Crap! I forgot my birthday was yesterday too!" - Kickhead on Hunter

For the record, Furkeyno's birthday is on May 7. See here for why that is important.

Furkeyno started blockading on November 2011 with his old flag Nemesis. He wasn't that successful there, he left and created his current flag Summer Attack. He had huge success with Summer Attack. He also attacked Admiral island but he pulled after 1-1 score. He left Summer Attack because of real reasons and when he came back he created his another flag named Fresh Tarts. He had great wins with Fresh Tarts such as Scrimshaw,Kent, Basset and Caravanserai island with his blockade organizer and adviser Wirelesscon. He usually JC-LA in his blockades but sometimes navs too.

The big rulers of the ocean generally hates Furkeyno because of blockades and forums. He is true blockade lover than island sitter. He usually uses his friend's fleets for blockades and loves paywar on his blockades. If you do not look politically, he is not bad at all.

Furkeyno loves to be king and orginize things. He currently has 2 flags, one of them is active other takes alt flag position but he moves a lot between his flags, named Proud To Love (formerly Summer Attack) and Fresh Tarts.