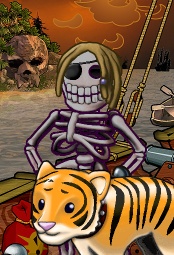 Fluffmeister started on the Sage Ocean at the beginning of 2007. He started on Viridian Ocean September 2007.

Fluffmeister joined a couple of crews before meeting Sober, his previous captain in the Lords of Chaos, and has been with the Lords of Chaos ever since, rising to the rank of senior officer, since this time he spent a small time as Captain, covering for Sober. However, due to Sober's real life work commitments increasing, he had less time to spend as Captain, so handed Captainship to Cindersh, the present Captain. The crew was formerly in the flag, Superbus Haliaetos, where Fluffmeister was made a prince for his efforts, but after the Lords of Chaos fell out with the flag, the crew left Superbus Haliaetos and wandered the ocean for a couple of weeks before conversations started with a couple of other crews about starting a new flag.

This eventually happened 15th May 2007 and the flag Project Mayhem was formed. Fluffmeister was a lord of this flag.

Unfortunately, the flag was a quiet one, even though quite large and rising to 10th ranked in fame in a short period. This resulted in a Move to Raving Notion on the 6th August 2007. This move coincided with two other Crews who were friends with the Lords of Chaos moving too, these being the Nasty Drunks and the Elite Privateers. He was given the Title Of Lord of the Flag Raving Notion at the end of August 2007.

The Crew left Raving Notion in December 2007 and Joined a New Flag, recently started by Vanway called Sage Rockstars, now re-named to Crazee. He was made a Lord in this new flag just before Christmas 2007. During the middle of 2008 the crew moved to a new flag called Dead Man's Legend. In October 2008 the crew moved to a new Flag, Eternal Glory as Dead Man's Legend had become really quiet and did not Blockade as promised.

About this time, Fluffmeister met Jinxplus a real sweetheart and good friend.

Fluffmeister counts as his mates all the senior officers in his crew. These include Madaverick, Phylix and Cindersh especially. He also has a younger brother on Sage called Sailbunny who has similar interests to himself. He has a new friend on Sage who he is mentoring called Koriel who wants to become a great B'navver. He does not suffer fools gladly, nor people begging for things as they should be prepared to work for them. Fluffmeister also has a mate called Jerrymax who is a great help to Fluffmeister in sourcing items. Fluff also has a ward called Carcrash. He is also really happy that Koura has returned to the crew after her travels seeking enlightenment! Dudebot also helps out the crew when he can!

He loves blockades as these are his favourite things to do on the whole of Sage. Fluffmeister keeps a small private fleet at Kent for their event blockades and allows the crew's officers and flagmates to use these ships for event blockades.

His own favorite ships are a custom renamed dhow called Destroyer and a sloop called Chaos, which is painted all black. They are usually based at Admiral Island where he has a estate.

In September 2007, Fluffmeister took a look at the Viridian Ocean and decided to give that a go as well! The first crew he joined were the Soul Collectors.

Fluffmeister now has a pirate on Hunter Called Fluff

Fluffmeister, at the end of April 2008, has invested in a massive POE sink, an Estate, for the wedding of Cindersh and Monkeyman in July to match their Real-Life wedding!

Fluffmeisters favourite quote seen on Sage so far is:

Master Leslie says, "Four years of mime college... and this is the only job I can find?'

Those guys at 3 Rings sure do have a sense of humor!