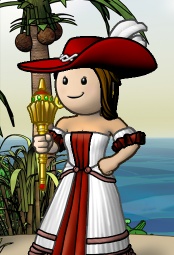 Cindersh started on the Sage Ocean at the beginning of 2007.

Known as Cinders, she joined a couple of crews before meeting Sober the captain of Lords of Chaos in November 2006, and has been with the Lords Of Chaos ever since, rising to the rank of Captain due to Sober's work commitments on 20th October 2007. She is the flirt of the crew as she always carries a bedroll with her. However her fiancee, Monkeyman, does not believe the rumours.

Cindersh counts as her mates all the senior officers in her crew. These include Fluffmeister, Sober,Phylix and Yvonnef especially. As well as former crew members such as Madaverick. She does not suffer fools gladly, nor people begging for things as they should be prepared to work for them.

Cindersh is always working hard on her Battle Navigation and Gunnery, and she loves blockades.

For her 21st birthday, the former Captain, Sober and the crew presented her with a fully-customized sloop, to have a custom name of her choice and a full repaint in the colors of her choosing. Cindersh has chosen to name the sloop the "Glass Slipper" and to have it painted white and violet. She is very excited about this amazing present and wants to say a huge thank you to both Sober and Fluffmeister for organizing it.