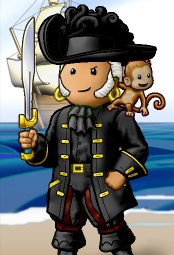 Sober started on the Sage Ocean during 2005.

Sober has recently, unselfishly, stood down as Captain of the Lords of Chaos due to increasing real-life work commitments, he has had a long history with the game, beginning when he joined Chaos Corsairs (Lords of Chaos were called that then) when it had just started, but it was already a great crew. Tamorin was the one who invited him to join his crew when Sober was just a greenie looking to buy a sword in Lincoln Island stalls. In that crew Sober met nice pirates, Jackbay, Hillyop and others. He saw them as awesome pirates and pillagers. Another crew from the flag, Muro Ami, called the Phals made a great impression on Sober.

He was working really enthusiastically and trying to get promoted in the crew. At this time some other great pirates and mates, Cactus and Keep joined the crew and proved to be great friends to pillage and chat with. Also a pirate who had been playing the game almost from its beginning, Arctic, joined the crew. Arctic made Lords of Chaos even stronger.

After some great fun months in puzzle pirates, senior officers started to leave the game as well as the crew. The newer players became the new senior officers; Cactus, Keep, Arctic, Madaverick, Madice, Malola. The crew pillaged on Sage several months untill Tamorin retired from the captain's position and handed it to Arctic. After a few more months there were some arguments in the flag and Lords of Chaos left suddenly.

Sober didn't agree with that decision and protested by leaving the crew. He joined the Phals. Then there followed some unlucky months for the crew and it began to go down. Arctic left the crew and made Keep the captain. She managed to keep the crew together. After some time Muro Ami flag died and Fanfarrons created a new flag, Superbus Haliaetos. As Sober was in the Phals, the crew joined that flag and started a new era.

As the new flag was growing and looking for new crews to join, Sober still had some sentiments for his first crew, Lords of Chaos. So he asked Tamorin, as he had come back into the game, to join the flag. He wasn't willing to do that, but he made Sober an offer that if he went back to the Lords of Chaos, they would join the flag. This was a really hard decision for Sober, as he was already feeling very comfortable in the Phals, but Sober decided to do it.

Sober went back to his old crew and started to work again as a senior officer, pillaging and working hard to make it great again, there we 30 - 40 members at the time. There were bad things happening such as Madice leaving the crew, Cactus retiring from Puzzle Pirates and some other things. After several weeks of pillaging, Sober asked the senior officers if he could become captain of Lords of Chaos. That made him work even harder. Sober started building the crew all over again - he met nice pirates on pillages such as Fluffmeister and starting pillaging with a pirate called Phylix.

They became officers with the Lords of Chaos and were working hard for their promotions and finally they became two of the senior officers that make the crew run so great these days. Fluffmeister with his great ideas and support for anyone who asks and Phylix with his great pillage skills. There are several more great officers:

After a falling out with the flag, the crew left Superbus Haliaetos and wandered the ocean for a couple of weeks before conversations started with a couple of other crews about starting a new flag. This eventually happened 15th May 2007 and the flag Project Mayhem was formed.

Sober lives in a manor on Admiral Island and his roomates are the other royalty of the flag Project Mayhem and a hanger on named Fluffmeister. The crew has a party ship called Rude Angler, a merchant galleon based at Admiral Island which has all the games tables on it.

Sober loves expensive, black clothes and can be seen at blockades and special events strutting his stuff in an all black captain's outfit.