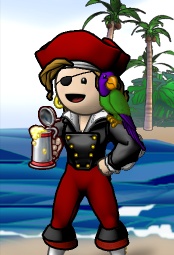 Ensiwe is an independent pirate

Ensiwe began her career as a part of the flag Eccezionale. She was an eager pirate and quickly advanced through the ranks to become a senior officer in her first crew, Tempesta Mortale . As the dynamic of Eccezionale changed, Tempesta was forced to merge with another crew in the flag, the Midnight Wolves. Frustrated with the lack of playtime by the senior leadership of the Wolves, Ensiwe and her more active crewmates decided it was time to move on. And with the help and support of her close mates Rewth and Obie, Ens created and captained the crew Rotal Dreagain in June of 2004.

In July, due to some interpersonal conflicts between the Rotal mates and the rest of the flag, Ensiwe moved the crew to the flag Nidiata Dei Draghi in order to provide her crew mates with a more active and welcoming environment. In late August of that year Eccezionale finally transfered ownership of Oyster to Nidiata Dei Draghi and as an active member of the island council, Ensiwe was appointed governor. She held the position of governor for over a year and a half, making tough decisions of building placement on the tiny island that is beneficial to the residents as well as the growing ocean economy. On August 5th, 2004 Ensiwe married the pirate Grinwold, but their brief marriage ended when Grinwold quit the game to concentrate on his studies. She is still single.

When the flag Notorious Fandango first emerged, Ensiwe became a senior officer in Fandango Familiars under her alt Briga in order to try and revive her interest in the game. After many blockades and greevil doings, Ensiwe passed governorship of Oyster to Aerias, left Nidiata Dei Draghi, and joined Fandango Familiars as a permanent member. In July 2006, Ensiwe moved on to the crew Empires Fall, leaving her trusty alt Ens to serve as senior officer in Fandango Familiars. Since then, she has stepped away from active YPP duties and now lurks around the ocean, alchemizing and carpentering.