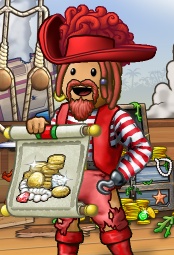 Empire is a pirate on the Meridian Ocean, originating from the Viridian Ocean, and was captain of the crew The Crimson Tide and former governor of Raven's Roost. He is currently a fleet officer of Stripped.

Empire started his journey as a well-known pirate. He met his new captain Chunkoha. She brought him into her crew Aftermath. When Empire told her he knew a lot about Puzzle Pirates so Chunkoha made Empire a senior officer. He met Trunkszero, another senior officer. After Empire joined the crew it was all uphill from there. New members joined and the crew fame went up very fast. To this day Empire is still making the crew better. Aftermath was looking forward to that summer along with Requiem of Command. Requiem of Command teamed up with Scotland The Brave to rise to the top of Viridian and take over an island or two and all the event blockades to participate in.

After Empire's long break form Y!PP, he started looking for a bigger crew to join. His crew joined The Cooler and he became friends with a lot of the pirates in the flag. His captain decided to leave because there was too much spamming on the flag chat, so Empire left his crew and went to BloodSoakedHeartagram. In this crew he obtained a sloop and a war brig. Just recently Empire sold his sloop for 27k. He and his good friend Blindcrow love to go into flotillas along with Duot, another of their friends.

Empire loves to blockade. On 22 July, 2008 empire entered the Viridis Island event blockade and won 6 out of 7 rounds with a combination of over 700 points total. Empire received the old glory. He is now going to work towards the victory banner. Empire never really started counting his buoys but as his love for blockades carry on, he hopes that he will soon get victory banner as a memory of his blockade love. The weird thing is Empire was only 6 months old at the time he had well over 3,000 buoys on record.

He is looking forward to getting a war frigate and start building a flag fleet of a estimated number of 10,000 ships consisting of war frigates and war brigs, and a pillage fleet of 6,000 ships, consisting of 3,000 sloops and 3,000 cutters. Empire's story will not end there as he intends to make a crew and remake his old flag and bring it back up to power and to the spot where it rightfully belongs at, number 1. However he's going to have to work very hard against Sea Wrath to get to number one so that's his plan for now and ever.

A New Hope on Viridian

March, 17 2009 the crew Empires Legendary Fleet rose up from the ashes and at her helm was Empire. With his crew he planned to get his fame up to celebrated and get The Cooler back on the fame list where they belong. He currently is in the crew BloodSoakedHeartagram.

As they grow with power Empire shall grow with experience and fame he will bring his crew to the top and take over these islands at the same time: Terra Island, Napi Peak, Tigerleaf Mountain, Olive Island and Last Stand Hill. Empire might be gone for a while but when summer comes around he will be back and ready to raise his crew into the fame list. Empire just recently bought a cutter to start his pilliging fleet. It is the first ship of thousands to come, and he is looking forward for his crews fame and numbers grow just recently he participated in what he called "Viridians Saturday Blockade Madness". Why does he call it that? Because there was atleast 10 blockades going on at the same time and he was proud to be apart of that. He was also suppose to Bnav in the blockades but he had to cancel as he went out of town but he got back in time to join the "Sinky fun". Empire will bnav in the next blockcades involving Vanguard and he hopes to sink alot of ships.

After a long absence from YPP Empire is returning. He is currently helping Gothickisa reconstruct BloodSoakedHeartagram. Her plans are to get it up and running then create a flag of her own with Empire and Gothicdanny. She plans to rise into the fame rankings and blockade with Empire's Fleet.

As Gothic Religion rises through the ranks, Empire carefully plans out pillages and flag blockades. They are not officially blockading but are participating in several event blockades. They have yet to get a second crew but Ladylandlova and her crew, will soon join the ranks of GR.

The Crimson Tide and Barely Dressed 2012

Empire has returned onto Meridian a captain. He has teamed up with Barely Dressed to learn the ways of blockading in hopes of one day rejoining Gothic Religion to take over an island. His crew building is going slowly but will continue as the days go by.

Announced early in 2013, Empire officially retired from being captain and pursuing islands on his own. However, to this day he is still active on the game helping out Barely Dressed in his free time.