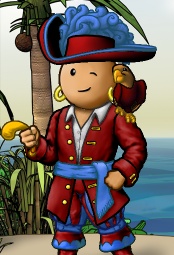 Depenguinde is a senior officer of the crew -Frozen- and a member of the flag Access Denied on the Hunter Ocean. He has achieved ultimate standing in poker, Rumble, Spades, Hearts, Drinking, Shipwrightery, Treasure hauling and Swordfighting. His best puzzle is rumble, and his worst puzzle is Duty Navigation. He also likes fighting skellies and zombies.

His sword of choice is the falchion, while his favorite bludgeon is the blackjack.

During Depenguinde's time as captain, the crew changed a lot. It switched flags, and after a week or two, became unhappy under that flag. A friend convinced Depenguinde to join the flag Varsity (which no longer exists). The Lost Allies were very happy under this flag, but the crew started to shrink as the Lost Allies weren't very active pillagers.

Depenguinde started to crew hop with -Frozen- to help lead war frigate pillages with Zeroblaze. He soon realized that things weren't going to improve if he stayed in the Lost Allies, and thus permanently switched to the crew -Frozen- where he was welcomed warmly. After spending enough time devoted to his crew, Depenguinde moved up to the rank of senior officer and is currently very happy with -Frozen-.