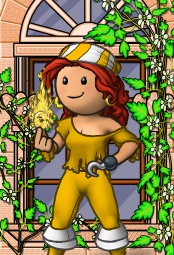 Cerex is currently a fleet officer and damsel of Amphitrite's Nereids and a member of Poseidian Oracle on the Sage Ocean.

Cerex started playing in May 2005 with a 30 day trial on the Cobalt Ocean with her first pirate named Rana. With one day left, she decided to move to the Viridian Ocean, the only doubloon ocean at the time. Since Rana was taken on Viridian, she decided to use Cerex.

The first crew she joined was a player-run Academy to teach greenies how to pillage and play puzzles. She learned many techniques there, but had to take a two month break. Upon returning afterwards, she found everyone to be dormant. So she was on the search of a new crew. She checked the jobbing board, compared crews of the top ten, checked their info pages, and found a new home.

Working hard with many late nights she eventually reached senior officer rank of Ocean Generals, though this was after many changes had occured, both flag and captainship. She felt the need to try something new and to venture into new waters. Heading into the Hunter Ocean when it opened, she couldn't find a place for herself, and so ventured further into the world of the Sage Ocean.

Joining Master and Commander, she worked hard and reached officer rank while Billybudd was captain. Then when Laccie made Sirens and Masters, she joined her friends there. The two crews merged, and she was promoted to fleet officer. After this, captainship passed onto Ceegee and she was promoted to senior officer and ladyship of the crew. She had then been trying her best to help her flag and crew, and was promoted to royal for the first time. After Ceegee left Headless Doubloon, Cerex decided to start working in a smaller crew, and since she couldn't leave the flag she fell in love with, she moved on to Hell's Angels, a crew in the same flag.

A goal of hers had been to start her own crew, ever since starting on the Sage Ocean. And so, on June 25th, 2007 she made the plunge and started her crew Siren's Eventide. On September 6th, 2007, with the skills and knowledge she had gained from her beloved flag mates, she ventured off with Marysangre and her crew Vampire's Lament to create their own flag called Deadly Obsession. After some time, Marysangre made the decision to try a different flag and on November 7th, 2007 she took her crew to Raving Notion. Cerex left alone in the flag they had created, decided by a vote with her Senior Officers to join her friends in Toil and Trouble to save her crew. She held onto Deadly Obsession with an alternate crew, and made this move on November 17th, 2007. On November 21st, 2007, Marysangre approached her saying she was unhappy in Raving Notion and wanted to try being the queen of Deadly Obsession. Cerex agreed to give her a try, and decided to stay with Toil and Trouble while she worked on her crew.

As time went on, she found real life to impede her time online, and so her crew suffered. She decided to join with Mistykat and gained the position of Senior Officer there. After awhile she became less active, and on one trip back online to get updated on current events, she found the crew to be mainly inactive and learned they moved to the Hunter Ocean. She then moved to another crew in the flag, Dauntless Temper, as a Fleet Officer. At a later time, after being inactive for a couple weeks, she came back to find they had moved flags to Passive Aggression. Missing a lot of her friends from Hell's Wrath and Hell's Angels, she decided to move back in with them in their new flag and crew, and currently is working as a Fleet Officer there. She isn't quite sure where she plans to go from there, but does admit to feeling the need for PoE.

A few of my Trinkets