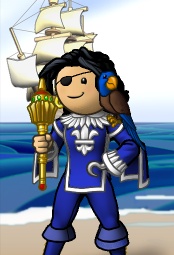 Ceegee is a senior officer and wench of the crew Death Wish and a princess of the flag Eternal Glory.

Young Ceegee started her pirate career soon after the Sage Ocean opened. Starting humbly as a pirate in the elite Wrecking Crew, she soon joined Headless Doubloon, where she gained officer status under the tutelage of Marux. During a period of political instability in the crew, now renamed Power of Moonlight, Ceegee was promoted to the rank of senior officer, and when Power of Moonlight finally split into separate crews, Ceegee stayed under the captainship of Billybudd, becoming one of the founding officers of the again-renamed crew Master and Commander. Later, she joined Laccie in founding a new crew, Sirens and Masters, which Master and Commander later merged into. When Laccie left Sirens and Masters, she passed the captaincy to Ceegee, who then renamed the crew to Caustic Affliction. However, as an increasing number of her former crewmates from Headless Doubloon joined her crew, Ceegee decided to honor their past crew by taking that former crew's name, refounding Headless Doubloon more than a year after the original crew's first rename.

Ceegee's ever-expanding list of trophies is a testament to her high level of experience and success in blockades, skellie-hunting, and duty puzzling.