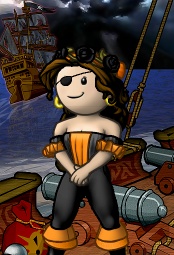 You may also be looking for the pirate named Calamari.

Calamarie is a pirate on Midnight Ocean but can be found on Malachite, Hunter and Cobalt occasionally.

Calamarie began her pirate career on the Midnight Ocean back in 2004 under the name of Mariclare upon the shores of Byrne, wanting a change she started afresh as Calamarie on 11 December 2005.

After assisting in the defence of Labyrinth Moors in May 2006, Calamarie decided it was time for a change, so she moved to the blue oceans of Cobalt.

November 2006 saw Calamarie's return to Midnight, where she merged her old crew into Polaris who were in the flag Blighted. Here she joined up with longtime friends and hearties and soon felt at home again back on this blue ocean. In December 2007 she became Blighted's monarch and honour she was very proud of. In February 2008, along with a small handful of friends, she saw it time to bid goodbye to a part of modern Midnight history and leave Blighted. She made the decision to join up with friends in the flag Midnight Marauders, after an enjoyable year there she went with her crew to join a newly made flag Suntne Vacci Laeti, here was where she became Governor of Tinga for a long period, helping clear the island up and make it aesthetically pleasing.

These days she can be found with her crew in Tyranny, where she has the the pleasure of returning to the active blockade game, and still learn new things 6 years down the line.

She has particpated in numerous blockades as either vice admiral or admiral, and also helps flags out with advice on blockades.

It is here she can be found often in one of the many stalls and shoppes she runs.

Upon her arrival on 21st May, 2006; Calamarie worked hard and rose to the rank of fleet officer in the crew Redemption, and was assigned as the ambassador for their flag Ascension.

When several pirates left to create Halcyon, Calamarie felt a move was in her best interest, and joined as a senior officer of the flag Moonlight Requisition. Sadly, as a large group of pirates sought their personal achievements elsewhere, this flag was forced to disband and Halcyon moved to What The Falchion.

Calamarie and friend Penguinmaste felt this wasn't the best place for them, and after consultation, they created Relentless and joined the flag Imperial Margarine.

Relentless moved on from Imperial Margarine to create their own flag Merciless where they intend on re-awakening the dullness that Cobalt sometimes brings.

Having achieved all that was to be done there, Calamarie packed up her bags on 11 November 2006 and trundled her way back to Midnight, to her hearties and her "home" ocean.

She can be found here managing her stalls and sailing the seas occasionally, having fun with some old hearties and friends.

Calamarie can be found here occasionally. She is having a blast here with many friends from all oceans, pillaging, pvping, and blockading.

Calamarie turned up here the day it was opened, and promptly starting finding her way around the new ocean. Setting up a Shipyard and Iron Monger with fellow pirate Penguinpaste and starting out in the flag Midnight's Massive Masts.

Soon after she decided to leave the flag, create her new crew The Seventh Circle and join a newly founded flag called Enigma. The crew is no longer part of that flag, but when she is on Mala she can be found playing alongside like-minded pirates who are there to blockade, have fun, be merchants, pillage and of course good old PvP. She can be found occasionally on this ocean passing the time of day with some friends.