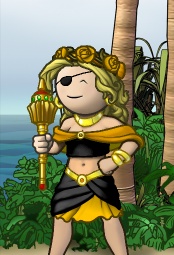 Cairna came to the Hunter Ocean as an independent pirate. She first started her pirate career on the Midnight Ocean.

When Cairna started her pirate career on the Hunter Ocean as an independent pirate, she joined the crew Chaos Soldiers as a fleet officer. After the captain left that crew, she was asked to join Wayan's crew, Skull Bashers, where she received the rank of senior officer. She later became princess of the flag Beyond the veil.

She made a lot of very good friends in Skull Bashers, such as Wayan, Ramzi, Foreveryoung, Megadumbo, Shinnj, Ibka, Lucianna, Legalpirate, Cleansanchez, and many, many more. She loves helping the flag in blockades and pillages.

Following the ocean merge, she could be found on the Emerald and Meridian Oceans.

On the Emerald Ocean, Cairna is currently captain of the crew Skull Bashers and served as a monarch to both flags, Knockout and Rebel Rousers. She was the last known monarch of the flag Beyond the veil before it disbanded.

She is currently the monarch of her inter-ocean flag Knockout and the captain of the crew U-Turn on the Meridian Ocean.