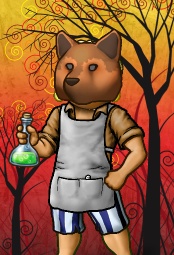 Bubber is a pirate on the Meridian Ocean. Prior to the ocean merge he had been a native of the Viridian Ocean.

In 2005, Bubber found himself on the Viridian Ocean. His early history is not very known, due to his young age. His only memory is of a female captain, whose crew he had found himself in. She had given him a blue and grey frilly shirt, and was very kind to him.

2008 Bubber came back to the Viridian and joined Thorn and worked his way up the ranks. Though impatient, he acquired the rank of senior officer through his hard work and proof of various leadership skills. He became close with many of his old mates there, such as the Viridian renowned pirates Thorn, Papabear, and many others.

Two years later, however, The Crown had come to an end. In the summer of 2009, Thorn had been thrust ashore for good, and his beloved mates were left inside of his creation. Chaos emerged, and eventually within the next year, the crew and flag had died. Bubber grew weary of the inactivity, and, though forever loyal to his captain, he was left with the decision to leave.

Staycr was a good mate of Thorn and Bubber personally, and took Bubber in after he had found himself independent. She had known what kind of a mate Bubber had turned out to be, and so, without even a request of his own rank, she had bestowed Bubber with the ranking of Fleet Officer, and to this day he remains.

Jameskk was created by Bubber as a secondary pirate on his account. He was created shortly after the 2 years part as previously explained ('08-'10).

After the pirate's creation, Bubber (now under another name) had wandered aimlessly throughout the ocean. Until one day, he had stumbled into his mate, Hotdumbjenny; she, at the time had been apart of the disbanded crew Wayward Boyscouts, under the marvelous Captaincy of the great Junerose. It was here that Jameskk had made genuine friends, such as June herself, and another girl, Spells. With the Scouts, Jameskk and the clan had made home in several flags: Res Gestae, Saints and Sinners, and eventually their very own, the Scout's Rebellion.

Throughout his time in the Scouts, James had been taking breaks to go back Ashore for whatever the reason may have been for each time. However, when he had returned from a break in October of 2011, he had realized a horrible change. The Scouts was gone, and under the dual Captaincy of an old mate of James' on Bubber, and his at the time lover, Tipsybee. During this depressing finish to the Boyscouts, James was given an offer from Tipsy. Whatever this offer was, James had decline and left.

James had joined forces with his good buddy Spells in her newly formed crew, VooDoo, to help her raise through the ranks and attempt to revive the scattered and somewhat lost Boyscouts from the end they had to endure. He stayed there briefly, and was joined by June and a variety of "Original Boyscouts" there. Most remained until June had split to create her own crew INDEED, now renamed and the official revival Boyscout crew, the Exiled Boyscouts, under their own flag, INDEED. James had followed June to her crew, and to this day Jameskk remains there.

No matter where the Scouts have found a home for the while, they are all still one big family. The Wayward Boyscouts live on in all of the crew.