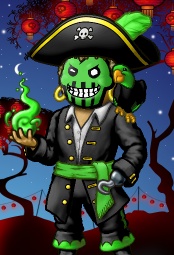 Bobbyyb is a pirate from the Meridian Ocean, originally the Viridian Ocean prior to the ocean merge. He is captain of the crew Phantasm, and king of the flag Reign of Chaos. He loves his crew a lot. He is also famous for his cursed face portraits, of which he has four. After the ocean merge, Bobbyyb renamed his pirate to a name he's always had his eye on, and was known as Shaz.

Bobbyyb washed up on the shores of the Viridian Ocean in October 2007; he originally spawned on Napi Peak, in the Garnet Archipelago. People claim that he is one of the craziest captains on the Viridian Ocean. Some believe it is because he was born on Halloween, in 2007.

Bobbyyb has navigated in the following blockades: