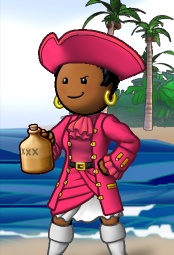 Belyn, better known as Bel, loves to island hop around Sage. She enjoys having fun with her mateys and kicking back at the inn. Her hobbies are Rumble and playing poker and her favorite puzzle is Alchemistry. She looks forward to earning some ultimate trophies.

She has her own small fleet (30) of standard named ships.

She was trolling through her games page on HP Games and saw a link to a pirate game so she figured, sure why not? Her first thoughts were that the Lego-like people in pirate hats were pretty weird. As a greenie she had no clue what to do or what the point of this game was. There are even rumors that she tried to hold conversations with swabbies.

On her first pillage, she was made a cabin person in a crew by the name of Fiddlers Green. After that she eventually worked her way up to officer. After about 7 months the childishness and drama became too much for her. After a ridiculously immature argument with a senior officer, she was gratefully expelled from the crew.

She was picked up by the fabulous Crossheart and invited to join Super Heroes as a Fleet Officer. And when her adventurous and crazy captain, Casper, headed off to start a new crew, she followed him willingly. And now as Senior Officer in the crew Hide and Seek she's happlily expanding her pirate horizons and making some really great friends.