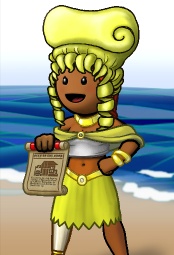 Avasta is the captain of Ye Hardy Mates, former governor of Eta Island and current governor of Namath Island.

As a long-standing royal serving on Silver Dawn's ruling council, Avasta has been a staunch advocate for crews' rights. She has been the captain of Ye Hardy Mates ever since she founded them, originally in The Midnight Sun, to remain with hearties as her old crew left that flag. In her role as captain, she has inspired fierce loyalty in her mates.

Her role as governor was an interim position, taken up after Clinton found he was unable to continue in that role. She passed the governor's mantle to Bristar on 3 April, 2006, following her election to that role.