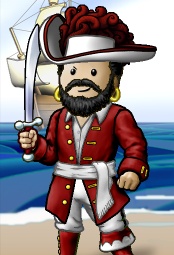 Clinton is a senior officer and lieutenant of Innocent under the flag of Crimson Tide.

Clinton makes his home on Jorvik Island. He can frequently be found in the riggings, manning the sails in the pursuit of PoE, kraken's blood, and fame. Though he has passed on the deed back to his crew he still claims the upstairs office of Helsingkor as his office and only land-bound residence. Though Innocent now flies the flag of Crimson Tide Clinton (and the rest of his crew) still maintains ties and relationships with his long-time friends and former flag-mates in Silver Dawn.