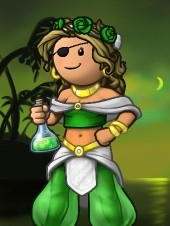 Anditwo actually started out as Andijb on the Viridian Ocean in June 2005. Under the direction of Sjieg, she learned the basics of becoming an officer. Unbreakable Metal Fleet became very successful and too large for comfort. Eventually, she hooked up with 4 amazing pirates and formed the crew Touch of Midas. Shortly after this crew fell apart, some personal conflicts drove her to leave Viridian in September 2006.

This is when Anditwo was created on Sage. Taken under wing again by Tibikazi and Prosurfer, she was very happy in a little crew. Tibi merged her into Your Worst Nightmare. As YWN grew and grew, she met another great pirate, Parazite. When she left YWN with Para and joined Cookies 'N Cream, a much smaller crew. She has left CnC twice and came running back both times. She has since left a third time, to The Undead Skeletons, where she has stayed to this day. Rumors on Sage consist of a relationship between Andi and Stevenata, I guess you will just have to ask one of them :)