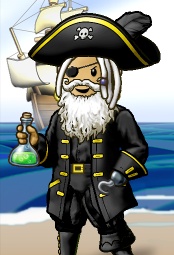 Alkymyst wandered ashore on Sakejima Island in the Viridian Ocean on the 1st of November 2005. He was not impressed by the pink colour of Sakejima Navy's clothing, so he moved his home to Dragon's Nest, where he quickly rose to the rank of admiral, and was often seen proudly wearing his lime green navy uniform.

Testing the ocean, he jobbed with several crews. Liking Rolling Thunder the most, he joined as a cabin person. He eventually achieved the 5 piracy masters required to become an officer in Rolling Thunder, and rose through the ranks upto senior officer. Where upon he was invited to join Sputty, Shadowss and Pandalink as a co-captain of the crew, and was given access to Lightning, the figurehead captain of Rolling Thunder.

When Alkymyst decided to memorize the Viridian Ocean, he discovered that being a co-captain of the largest crew on Viridian was too distracting. So, he left Rolling Thunder and founded his own small crew, Crucible. He fully intended to return to RT once he'd memorized the 282 ocean league points. When he'd completed the task on the 7th September 2006, RT had left it's flag and was conducting the Rolling Thunder Experiment, which involved RT senior officers forming their own crews and joining their own exclusive flag, Tempest. Alkymyst's crew did likewise, and he became a prince of the flag. A year later RT left Tempest and joined Sea Change. Alkymyst then became king of Tempest.

Alkymyst had been sunk over 100 times and was beginning to think he was invincible. Then on 20th April 2007 came the Sinky Sinky event. Just too many sinkings at one time for Alky. He staggered ashore minus a leg. Just 6 months later in October 2007 and another 100 sinkings the Atlantean sea monsters took his hand. The rot had set in now, and after just another month and only another 45 sinkings, in November 2007 Alky lost an eye. So far his blue starfish repellent seems to be working, over a 100 sinkings in Atlantis and no sign of the pesky creatures. Oh well, spoke too soon. 23rd August 2010. After a "Nelson" of sinkings in Atlantis, 111, they got him.

1. Alkymyst received his first familiar, a navy coloured Ippolito, on a citadel run with Brisky on the 11th August 2011. He named the seahorse Mon Mome (my bird) after the 100/1 winner of the 2009 Grand National steeplechase.

2. He received his second familiar, an aqua coloured Ippolito, on the 10th September 2011, once again on a citadel run with Brisky. He named the sea horse Aqua Regia (royal water) after the solution used by alchemists to dissolve gold.

3. On September 21st 2011, Alkymyst took advantage of the 'Box of Chocolate' event to purchase some dubloons, and upon opening a box was astonished to find a chocolate coloured octopus inside.

4. Alkymyst received his fourth familiar, an Atlantean coloured Ippolito on the 7th April 2012 on a citadel run with Elarinya. He named the seahorse Royal Athlete after the winner of the 1995 Grand National.

5. Alkymyst received his fifth familiar, an Atlantean coloured Ippolito on the 10th April 2012 on a citadel run with Elarinya and Xpirate. He later named it Camelot after the winner of the 2012 Epsom Derby.

7. Alkymyst bought dubloons so that he could gain access to Ice Ocean during the testing of the new sail patching puzzle. On the 4th of August 2012 he bought some of the new release gold boxes with the dubloons. Upon opening the second box, he was pleased to find a tan/tan parrot which he named Tannhauser.

8. Alkymyst received his 8th familiar, an aqua coloured krakling on the 4th of January 2015 on a kraken hunt with Yumizz. He named it Krakling Wakes.

9. Alkymyst received his 9th familiar, another aqua coloured Krakling on the 24th of February 2015 on a kraken hunt with Magerehein and Poemie. He traded it with Mrmatchless for a light green krakling which he named Krakling Rises.

1. Alkymyst received his first karkinos, blue/bronze, on the 8th June 2009, following an epic 8 hour Atlantean trip. He named it Herakles in recognition of the karkinos that aided the Lernaean hydra during the 2nd labour of Hercules.

2. He received his 2nd karkinos, aqua/silver, on 14th August 2011 following a citadel run with Technitium. He named it Iolaus, after Heracles's nephew, who helped slay the hydra.

3. and 4. On 21st August 2011, he received his 3rd and 4th karkinos on the same voyage, a citadel run with Brisky. He named the navy/bronze one Akheliois, after the river god and Herakles's enemy, and the atlantean/bronze one Deianira, after Herakles's third wife whom he fought Akheliois over.

5. He received his 5th karkinos, navy/bronze, on a citadel run with Brisky on 9th October 2011.

7. He received his 7th karkinos, a navy/bronze one on the 7th April 2012, the same voyage he received the Atlantean seahorse with Elarinya.

9. Similarly, he received his 9th karkinos, blue/bronze, on 3rd August 2012 on a citadel run with Brisky.

On the 5th February 2006, Alkymyst became the first pirate to reach ultimate standing in poker on the Viridian ocean.

Alkymyst can also be found on Ice ocean in the form of his alter-ego Alkymystic. On Ice he indulged in his favourite pastime of 'memming'. On 5th November 2008 he had memorized the entire oceans 121 league points. On Ice in a multi-tournament, he won what may be the rarest creature on all the PP oceans. A black and white cat, called Parrot by the OM's.

From time to time you may bump into Alkymyst on Sage, Hunter, Midnight and Malachite oceans. You may also meet his alter-ego Alkymystic on Midnight.