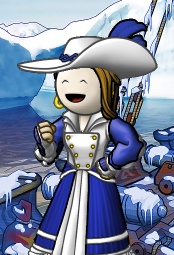 Aarcher is a pirate on the Sage Ocean.

Aarcher started life on Puzzle Pirates in July, 2006. She is the founder and former captain of the crew Red Ocean. However, she left that crew once she had reached high enough stats to become an officer in the crew Fair Winds.

Aarcher has moved up through the ranks, and is now ranked as a senior officer and first mate of the crew Fair Winds. She is also a princess of the flag Raving Notion, and ranked as an admiral in the Descartes Isle Navy in the Pelican Archipelago.

Aarcher has a myriad of stalls, which are spread throughout the Sage Ocean. These include six ironworking stalls, one shipbuilding stall, two tailoring stalls and one furnishing stalls. These stalls, and the island upon which they are located, are listed below.