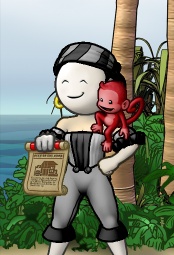 Valhalla is a pirate on the Midnight Ocean.

Valhalla started on the Midnight Ocean near the end of August of 2005 and was quickly scooped up by the crew Infernal Infidels. That day went down in history as the last time she ever achieved an incredible in bilging. She quickly subscribed, moved up in the ranks, and occasionally tried to take the captain's hat from Swamprat but it never fitted right.

Known as Val to many and Kilmer to a few, she is infamous for her goosing of fellow pillagers who achieve incredibles on duty reports. Val loves to swordfight and is an avid skellie fighter, having filled an entire trinket case with skulls she won from skellies and partially filling another with skulls which are traded.

She also governed Park Island from June 13, 2006 to September 11, 2006. Following the end of her term she slowly started heading off towards the edge of the map into semi-retirement.

Valhalla is currently serving as a fleet officer in the crew Good Omens, and is a titled member of the flag Riot.