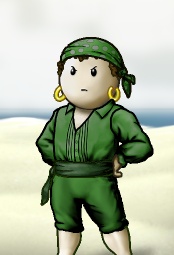 Theemperor is the captain and tactician of the crew The Lords of the Empire on the Sage Ocean. His current navy rank is lieutenant.

Theemperor decribes his approach to running a pillage as lax, and claims a tendency to maintain contol of a crew through polite banter and forming bonds of friendship as opposed to using force. His opinion is that if a pirate is planked by Theemperor, they can be sure they've definitely done something seriously wrong. Consequently, he tends to favour small ships where he feels this strategy is more effective.

Theemperor is enthusiastic about pillaging, to the point that he is always open to an invitation to pillage. He is a regular skeleton hunter (his first winning fray was at 18:43 (UTC) on the 29th of June) and appreciates being told where to find them. He enjoys playing Rumble, Drinking and most carousing games, including swordfighting, but refuses to risk his renowned rating for skeleton hunting. He does not specialise in Treasure Drop, so he makes a point of sticking to no-wager matches, and may often be seen trying his luck in free entry Treasure Drop tournaments. He is also actively working to improve his Gunnery abilities. He is also mildly interested in a Brigand King trinket so pirates who are hunting brigand kings should let him know.

As Theemperor is actively looking for chances to recieve an injury, he is on the lookout for opportunities to be sunk (whether in a blockade, flotilla, or in pvp).

Theemperor is an avid recruiter for his crew, and is always on the look out for new talent. He is also designated as the crew tactician.

Theemperor owns the deed to the sloop Stubborn Eel.