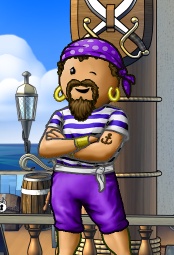 Zmasterben is a pirate on Midnight Ocean. He is currently a senior officer of the crew Black Death in the flag Bathrobe Army.

Zmasterben showed up on the Azure Ocean on August 6, 2003, during the beta testing period. He is best known for his love of poker and swordfighting abilities. Zmasterben is also known for his common crew hopping, and has been a member of The Unmanageables, Easily Distracted, For Love Of Booty, Eternal Inferno, Soaring Gulls, and Bellacos Banditos. Zmasterben was then recruited to Black Death, where he remains today.

Zmasterben has won several trinkets from various swordfighting tournaments and Ocean Master competitions, and is a well known skellie hunter with well over 100 skulls to his name. Zmasterben owns a white/white parrot named Andromeda (named after his wife, Carribean) and has won a tan monkey on Cobalt Ocean in a swordfighting tournament. After some brief time apart, Zmasterben and Carribean were remarried on October 26th, 2006 in Carribean's Estate where they currently reside.

Zmasterben is a trinket collector and as come into possession of many different trinkets since their release.