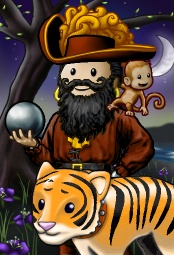 Yuduys is a pirate on the Meridian Ocean. He currently serves as a fleet officer of the crew ANGEL'S. A grumpy, easily irritable pirate, Yuduys is a stimulating conversationalist when he wakes up on the right side of the bed. He may occasionally be found on the poker tables engaging in witty banter, or on the seven seas gunning till his arms give out.

Yuduys first came to the world of Puzzle Pirates in the Summer of 2006, and washed up on the shores of Kirin Island in the Viridian Ocean. Yuduys joined his first crew, Columbia Fighter that same year under its captain, Simno. This is where he began to truly grasp what it meant to be a pirate. During this time, Yuduys also met his first pirating hearty, Youngking, whom Yuduys took under his wing and taught what he had learned about puzzling and pirates. Months passed this way, until Yuduys decided to leave Columbia Fighter in order to expand his horizons.

Yuduys then spent his next year hopping between crews, each time learning more and more about the life of pirating and its benefits. He finally joined the crew The Viridian Force and built a close friendship with its captain Cilon. Yuduys was soon promoted to senior officer and earned the title lord of the flag Viridian Avengers. Yuduys then obtained greeter status in 2008. He strove to impart his knowledge unto those who were unfamiliar with Puzzle Pirates, and was an active member of the greeter community for the duration of his pirating career.

As the year 2008 came to a close, Yuduys grew tired of the pirating life and stepped away from the public eye. For about four years, however, he would resurface for a few months before disappearing again. During these on-and-off periods of activity, Yuduys would alternate between the aliases "Yuduys" and "Yuduy." After disappearing for the last time, he did not return for a while.

Return to pirating and present life

Following his long absence, Yuduys made his return to the pirate scene on June 8, 2012. He had been away so long, his past status had been lost, and Yuduys had to start all over again. Soon after his return, Yuduys joined the crew Royally Screwed under the captaincy of Rebelchic. It was in this crew that Yuduys began to regain his former passion for looting, drinking rum, and other such pirate fancies. He built close friendships with the captain and her crew, and served as fleet officer. Six fun-filled months flew by before pirate politics forced Rebelchic to disband Royally Screwed. After saying his goodbyes, Yuduys wandered the ocean without a crew and captain to guide him.

One fateful day, Yuduys' meanderings brought him to a Sea Monster Hunt hosted by the crew, The Forgiven. Upon completion of the hunt, Yuduys decided that The Forgiven was to be his next crew, and took the crew oath under its captain Ljgmf. He was soon promoted to officer, and became an active member of the crew. At a certain point, Yuduys became known for his famous daily pillages- ensuring that all jobbers had an excellent time and were paid fairly, regardless the outcome of the battles. After three long years of devoted service to The Forgiven, Yuduys decided it was time to say his farewells once more.

On June 25th, 2016, Yuduys was initiated into the crew "ANGEL'S" under the captaincy of Solame and was quickly promoted to the rank of fleet officer. After many months of puzzling fun and serving the captain and her crew, other matters called Yuduys away from his life of pirating and forced him back into hiding. He now leaves the safety of his home only during the warm summer months, and may be found either playing poker in Jelly Belly's or gunning on various ships. He lost his left hand whilst bravely gunning in a blockade on Spectre Island on December 7, 2013.