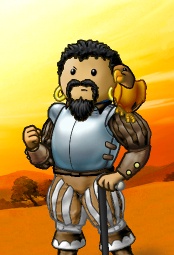 Youngking is a pirate on the Emerald Ocean and prior to the ocean merge, was on the Sage Ocean.

Youngking washed ashore in 2005 on Wensleydale. The first crew in which he progressed to officer was the Lords of Chaos, and he eventually progressed to fleet officer. Following disagreements with the captain, he founded a crew named "world makers." With them, he joined the flag Deepest Purple and was made royalty -- and then king, two weeks later. Under him, the flag grew, but each crew that was added was permitted a royal with voting powers. Eventually, there was a revolt in which the royalty expelled all crews from the flag, disbanding it.

Having lost his first flag, Youngking founded another. He stayed with it for a month, but then took a week's vacation from his crew, to get a better view of the ocean beyond his front door. In his travels, he met Whitewillie and they got along so well that after he returned to his crew, he merged worldmakers with Whitewillie's crew, BLOODSCALE DRAGONAUTS, of the flag Lunatic Fringe.

Soon after, Lunatic Fringe successfully blockaded Admiral Island. Youngking and crew expected some form of compensation, or at least gain, after the taking of the island, but when they failed to see any benefits after two months, they left to form a new flag, which they called BLOODSCALE REVOLUTION. Youngking was made royalty in the new flag, and within a week purchased his first familiar, a parrot.