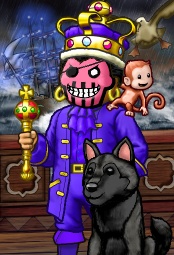 Yj started to play YPP in December 2006. His girlfriend Hippihanni introduced him to the game.

In February 2007, he got promoted to senior officer of the Shooting Stars of Sage. In June, he left this crew and joined PHOENIX as a pirate. On August 12th, 2007, he joined the crew Death Wish and became a senior officer. On March 30th, 2009, he made his own crew Starfall and became the king of flag Prestige.