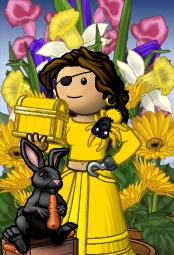 Yasmi started as senior officer and counselor of the crew Lilith's Perfume, and queen of the flag Devil's Advocates on the Meridian Ocean. Prior to the ocean merge in early 2012, she played on the Viridian Ocean, though originally she started of with a group of friends on Malachite Ocean. She now joined Imperial Coalition.

In real life, she is married to Devilx.

Yasmi has won her first monkey Koko Banana on a navigation competition. She is an avid collector, having all LE ships in the game. She also collects pets, especially cats and big cats and eggs.

Yasmi has big pride in decorating, specially her long list of shops and Pythoness's estate. One of her decorations has won her some fancy prices (event ran by Prometheus).

Yasmi has the following renamed ships: