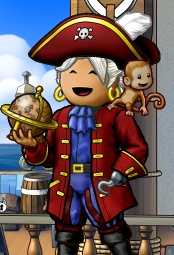 Vari is a pirate on the Cerulean Ocean, first mate of the crew Divers Down.

Vari claims to have spawned on Gaea Island, though given that he immediately joined real life friends in the Gaea based crew the Ratty Rats, this memory may be distorted by the hard drinking pirate life. The Ratty Rats soon became an inactive crew, and Vari joined his real-life girlfriend Owlet and members of her crew United Pillagers in forming the Night Owls. While the Night Owls were members of the flag Midnight Armada he lived with Owlet in her townhouse on Park, but returned to Gaea after a long absence from the game. His favorite puzzles are duty navigation and the "puzzle" of helping inexperienced players. He is often seen offering foraging jobs on the notice board, claiming that running foragables gives him an excuse to dnav. He has held various leadership roles in his crew and flag as real life and his level of interest in the game at a given time has allowed. Most recently he has stepped down as captain of Divers Down in favor of Fanofsonic and has taken over the governorship of Hephaestus' Forge from Garibaldi. With this new position, he has moved to Hephaestus' Forge.