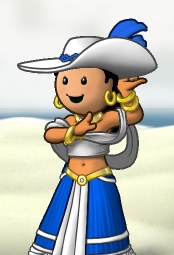 Tasina began on the Cobalt based on the Island of Sakejima. She was part of the Poe Snatchers, from the flag Nation Of Poe Snatchers, where she was a cabin person. After nearly the entire crew became dormant she joined The Booze Hounds from El Bandera di Diablo, which also became dormant. After this she moved to The Great Hornitoads a crew that she was on her way up the ladder with once she became a subscribing pirate.

It wasn't until March 31st of 2006 that she was a subscribed pirate. On this date, after The Great Hornitoads went dormant, she joined the ranks of Valkyrie Rising, under the flag Pride and Punishment as an officer. The crew then parted ways with the flag, creating Risen during which time Tasina was made into a fleet officer as well as a lady of the flag. When troubles arose, Tasina took her knowledge and ships to her own crew, XSV Dynasty, and now is captain of the crew and a lady of the flag Indestructible Fury.

After going dormant herself she's returned, still as the captain of XSV Dynasty, but is working to rebuild her knowledge and a fine crew.

14 December 2007, another round of being dormant and she's back to her subscribed self, but this time abandoning the crew that she had hoped to create on her previous excursion. Returning to The Cats Meow, under the name Deadly Sinners and under the flag Pride and Punishment, she gained the position of a fleet officer. Time has changed, but she's still the same ol' pirate. Deadly Sinners joined the flag Perseverance on 27 December 2007.

Achievements and contributions on Cobalt

Biography 2 | A change in oceans

Tasina is the same pirate on every ocean, but is now active on Midnight as well as Cobalt. Beginning her stat climb on March 7th of 2007 she returned as a subscriber and was brought up to the rank of officer in the crew Snot Rags, of the flag Blow Hard, the Midnight version of Valkyrie Rising and Risen.

She returned as a subscribed pirate as of 15 December 2007 to find no crew or flag, after a few Sea Monster battles she was picked up by the crew Alere flammam Veritatis of the flag Veracious Tenacity and was ranked as an officer among them. As of 29 December 2007 she was been promoted to fleet officer within the crew.

Tasina has recently moved to the crew Bu Shi Do of the flag Death before Dishonor, ranked as a fleet officer. In May of 2008 she earned herself the rank of senior officer.

Achievements and contributions on Midnight

As of 1 August 2013 Tasina returned as a subscriber to find a merged Cerulean Ocean. She was taken into The Jazzie Crew under the flag For Glory or Honour as an officer. Tasina-East was renamed to Tassypirate and as of 27 September 2013 returned to Bu Shi Do of Death Before Dishonor as a senior officer and lady.

Achievements and contributions on Cerulean