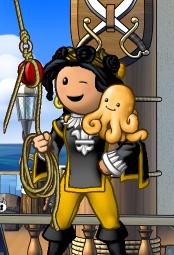 Sweetkaya hopped onto the shores of Viridian on March 15, 2006. She is now a senior officer and trader in Polish War Fog.

She was not at first a trinket hunter nor a skellie fighter. Sweetkaya started out as a pirate who wore raggedy clothes, wasted hours looking for a nice crew to pillage with, earning poe on that pillage, and wasting it all on poker.

Sweetkaya joined a crew called Polish War Fog. Its illustrious imperials struck out like a beam of PoE, and quickly she became a member in the vast crew. Even her long time friend, Blueagle was there and she had become a dressy, pillaging, greedy pirate.

Pillaging, she found, was a rather efficent yet tedious way of getting PoE. It was rewarding to get 10-20k a pillage but wasting 3 hours on one was not her cup of tea. Then after a long, hard day at work, a tournament for a rather odd looking trinket appeared and an idea clicked in Sweetkaya's head. Thus, she became a trinket trader at around July, 2006. However she did not automatically stop pillaging.

Even if Polish War Fog now is not up to its former glory, it is still a great crew with skellie battles being shouted around (mostly by Sweetkaya), Brigand King hunts being made, elite pillages brought up and even blockades announced. Pillages on their boats now may not get as much as a year ago, but it is still considered as one of the most high paying jobs.

Nowadays, pirates can find Sweetkaya on the streets of Lima or Terra usually, buying trinkets, bludgeon bones, swords, clothing, even familiars. She owns a lovely sloop and a highly decorated row house. She is currently a roommate in 2 shacks, a cabin, 2 cottages, a townhouse, a manor and a mansion. She is highly active in forums and if pirates ever need help, she's sure to answer.

The following are avatars from various artists depicting Sweetkaya: