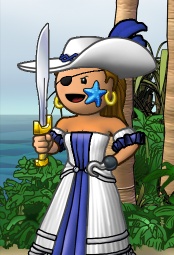 Sullylane is a senior officer in the crew Midnight Aurora and captain in the Dragon's Nest Navy in the Jade Archipelago.

Sullylane has been an active pirate since the time before doubloon oceans existed. Being a young scallywag of meager possessions, she was unable to afford a subscription and played on accounts that expired after 10 days. In February of 2005, Viridian was set up as a doubloon ocean. Shortly after setting anchor there she enlisted with The Insomniacs, befriending the likes of Jolyma and Lokiloki as the crew later became known as Brethren of the Coast. After a few years in the crew she finally became a senior officer. Later on, the crew departed from their long-time flag Imperial Coalition and became their own entity. Unfortunately shortly after that in the spring of 2008, a majority of the crew migrated to another ocean, something Sullylane was not prepared to do after spending so long developing her skills solely on Viridian. Thus, Sully (as she is commonly known) sought comfort in her former flag and joined the crew Midnight Aurora, which was led by Siren at that time. She is currently a senior officer with Midnight Aurora.

While she is not playing hearts (a favourite pastime), Sullylane can often be found participating in excursions to the Cursed Isles, where she enjoys plundering the natives. On April 5th, 2010 she got her first familiar, a serpent, from one such CI adventure. More recently, on July 16th, 2011 she earned a gator for Amazing Rigging, only 2.5 weeks after gators were introduced to the game.

Her favorite duties aboard any vessel are Carpentry and Rigging. It is in Carpentry and Treasure Haul which she often achieves top status and incredible in.