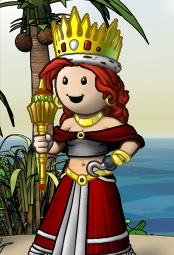 Siren is a senior officer of the Midnight Aurora.

Siren first started found her way on the ocean in 2005, and quickly found her home with the crew Dark Legion. Slowly working her way up the ranks to Senior Officer. As the crew started one by one to fall to the sidelines, Siren decided to take a break from the game for a six month period.

After returning to the ocean she found a familiar face a week or two in, Monlizzy, and rejoined some of her old friends in the crew Midnight Aurora, and the flag Imperial Coalition. She joined the ranks as an Officer and once again worked her way up. In February of 2008, Siren was promoted to Captain of Midnight Aurora. Soon after she was assigned the task of Governor of Dendrite. In May of 2008, she became a Princess of the Flag.

She had to stop playing for a year when a real-world chance of a lifetime came up. She resigned as Princess and Captain and will one day return to bring fear back into the ocean!