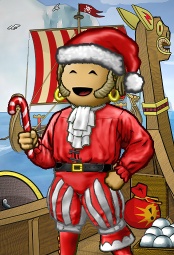 Sred is a pirate on the Viridian Ocean. He is a senior officer of the crew Squid Squad, and lord of the flag Sea Wrath. Sred has pirates on every ocean, though his pirate on the Crimson Ocean (not shown to the right) is named Steensred instead of Sred, due to Sred already being in use.

Sred joined Puzzle Pirates for the first time in October 2005, on the Sage Ocean. He stopped playing after a week, and then his pirate was deleted, because he did play on it.

Half a year passed with Sred creating new pirates, all by the name Sred, but this time his pirates were on the Viridian Ocean. He played them for a couple of months and then stopped playing, so the pirates became deleted.

In the summer of 2007, he created a new Sred and joined the crew Squid Squad. After a week he was given pirate rank. He had been in Squid Squad for some months, when he was given the officer test. He passed it. Just a week later he bought his first ship, the sloop Uninhibited Sawfish, and pillaged the Onyx Archipelago.

Once he was the executive officer while on a pillage for Bushwacker, who had to leave. Sred took over the pillage while he was a fleet officer.

After a long time of pillaging, Sred bought a manor on Dragon's Nest, and moved from his former home island Labyrinth Moors.

Sred did many Brigand King hunts with the other officers in Squid Squad, and once at the end of one, he was proposed to become a senior officer. This became so 10 minutes later.

At the time his crew held sea battle competitions every week, with prizes of 20,000 PoE for the winner. One week he won the competition with 41 won battles.

At the start of December, Sred became a greeter.

In the Halloween competition event, his team came in fifth.

In December he bought his first longship, did one battle with it, but gave it away to the crew as a Christmas present.

At the Christmas Event, his team placed fifth.

At the end of January Sred moved back to Labyrinth Moors and bought a mansion there where he now lives.

Sea wrath has now taken over Labyrinth Moors, and Raven's Roost. They took both islands in less than 2 weeks. 2 weeks after Labyrinth Moors was taken, Sred's captain gave him the deed to Mount Athos Mansions. A lot has changed since then but he continues to prowl the waters of Viridian.

All trophies have a value, but he values the hardest and most difficult.