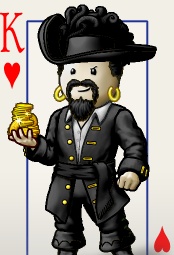 Sovereignty is captain of the crew Quixotic Schadenfreude, prince of the flag Felix Culpa, and governor of Whisper Island on the Obsidian Ocean. #Blamesov

Sovereignty, formerly senior officer of the crew Virtuous Sins, Prince of the flag PerfectlyEvilRedVexers on the Viridian Ocean. Sovereignty first started his pirate career unaware of crews, he soon found himself being asked to join a crew to which he agreed. Working his way up from cabin person to senior officer he struggled to keep his slowly crumbling crew from falling through. A pillage he led soon showed him that perhaps he was better off leading his own crew.

Unfortunately all good things must come to an end, but now with Dark Seas and the Obsidian Ocean, Sov rides again!

Sovereignty used to run a small trivia game at the DN inn or the Lima inn in the backroom. Announcing it before running into one of the backrooms he asked often strange questions relating to the game and gives out PoE to the first correct answer. Since his move this has not been resumed, but might once again!