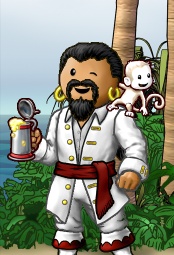 Sivius started his pirate career with the goal of owning his own fleet, reaching two sloops, a cutter, and a war brig within his first few months playing.

As of September, 2005, the highest fame ranking that his flag, Blackspot Raiders, was able to attain was 38th. While he considered this good for a flag that was, at that time, less than a month old, his crew's fame was not high enough to be ranked in the lists. Reaching that list became Sivius' top priority as Captain. During his flag's peak in October, Sivius became a greeter.

At the demise of the crew from his own reckless docktarting and lack of interest, the flag fell to shambles. All other crews in the Blackspot Raiders left for new flags and Sivius, now the only member of his crew, was left to himself. Sivius kept the crew and flag alive for nearly half a year.

Sivius' flag came back from dormancy when Kivo, soloing the crew Face the Music, joined the flag. Kivo was immediately promoted to royalty and the pair used the flag as a two-man war declaration machine.

With disinterest in his current position, Sivius was finally swindled away from his crew and flag by Dmentia, who at the time was the captain of the crew Wanderlust. As far as Sivius can recall, Kivo was "both bitter to see a war partner leave him, but enthralled to once again have full control over a flag". Sivius' membership within Wanderlust lasted only a few days, until he finally left to pursue a lone docktart's life.

As one of the "regular" docktarts on Alpha Island, Sivius was never too far from company and his interests turned to hoarding material goods such as ships, clothes and PoE. Within this time period, he also became a regular poster on the forums.

As of November 5th, 2006, Sivius officially retired his pirate with a blunt, un-heartfelt post. However, Sivius may be seen from time to time checking new things out on the Hunter Ocean.